Why Join The  American  Legion? 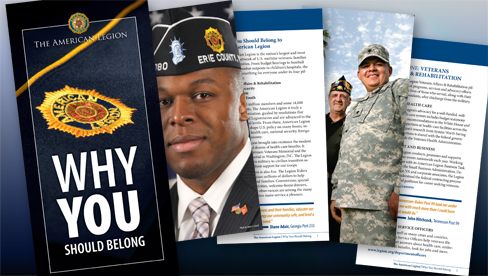 Click on above logo for WHY YOU SHOULD BELONG

A Force for Social Betterment

At the close of World War I, America was just emerging from its lusty era of rugged individualism. It was an era when the individual hammered out his own destiny and process, with little or no help from the government. An honest facing of facts brings out that American society was a cold society insofar as any organized public hands of helpfulness were concerned. The individual who fell upon hard times was left to private charity which meant mostly churches and the Salvation Army. There were no public resources or services to help the unfortunates.

When veterans of World War I came marching home, they found the nation utterly unprepared to care for the combat causalities of the war. The wounded, shell-shocked and the sick were lodged in poor houses, jails, asylums or what-have-you.

Veterans of World War I were much more closely knit than those of World War II. They trained in the same camps, fought on the one great front. Those who came home unscarred were appalled by the flight of their less fortunate comrades. They felt a concern for them and their dependents, which was a new and dramatic action aspect of what the country had known as friendship. This concern formed a bond between the charter members of the American Legion and gave them a great and noble cause, to fight for the adequate care and protection of their disabled comrades and dependents, the war widows and orphans.

They faced a monumental task. Laws had to be drafted and enacted by the congress to provide compensation for the war handicapped, to build hospitals, and to get protection for the widows and orphans upon whom the war had laid its heaviest and cruelest hand.

The American Legion wrote such laws, had them introduced to Congress, went out over the land to arouse the conscience of the people of America and mobilize support for its legislative aims. It did both with a sacrificial fervor that overcame all obstacles.

The Congress enacted the laws, it provided the administrative machinery, it appropriated the funds, it built the hospitals. Then to bring about a single responsibility for the carrying out of all veteran laws, and to achieve a unification of these government services, the American Legion put through Congress the legislation to create the Veterans Bureau, which has become the Veterans Administration of today. Over the years, a great network of government hospitals was built and a great structure of veteran’s legislation enacted which has made the American veteran the best cared for on earth. The rehabilitation program of the American Legion for the World War I veteran brought about, in its successful development, a great awakening of social responsibility in America.

When the New Deal Program was being developed, the government planners took a look at what the American Legion, through its vast rehabilitation program, had done for the veteran of World War I and decided to do the same thing for the American people.

So out of the rehabilitation brain child of the American Legion, there came the Social Security System with its retirement benefits and old age assistance programs for all the people. The planners took a look at the American Legion program of temporary emergency aid to needy children of veterans and there was born – with the support of Legionaries – the state and federal program of aid to dependent children – all children.

This is how we can hail the American Legion today as an unparalleled force in these United States for social betterment. American Legion concepts and its ideal of devotion to the mutual helpfulness warmed up the whole social climate of America. Today, America is extending its helpful hands all over the world through our assistance programs of foreign aid.

It all came about because the veterans of World War I came home enriched with the wonderful ties of friendship and gave those a meaning by consecrating them into the ideal of mutual helpfulness.

Do you remember when your platoon, your patrol, your squad, your team was under attack?  You were scared. You didn't know whether you would ever get home again, see your family, your loved ones. And the only thing that you could count on in that instant was your buddy. And you knew he was counting on you too.

Your buddy still needs you!!!

Maybe your buddy is in one of the VA hospitals; his war wounds and/or time have taken its toll on his body. Maybe he or she is a young veteran, just discharged from service in Iraq, Afghanistan or Vietnam, and is having difficulty finding a civilian job. Maybe your buddy is just an ordinary guy or gal like yourself, wanting to share stories and comradeship with someone who was in a similar situation.

The American Legion is the place for you to help your buddy and for your buddy to help you. Founded in 1918, it is the largest veteran's organization in the United States with over 3 million members.

We are veterans just like you. We care about America, our fellow veterans. our families and our children. As a member of our Post  we continue to serve our God, our Country and our Community. Your Post needs you now.

Our Legionnaires participate in many community activities such as parades, memorials, dedications,and service many individual community request. Our post also sponsors a  Boy Scout troop in addition to volunteering service to the VA clinic, VA hospital, and the Nevada State Veterans Home.

We have a funeral honor guard detail ready, willing and able at the family's request. Our funeral detail is available to all veterans. When requested, we are also available to help other veteran organizations with their memorials.

We sponsor local students to participate in Boy State, sponsor scholarships to better educate our children.

We are here to support and show our thanks and appreciation for your service to our country, but we can not do this to the degree it deserves without your support.